I have been on the road in WWOOF land for quite some time now and find myself becoming more and more involved with the ins and outs of WWOOF and WWOOFing. I still find it a very interesting way to dive into the family, social and cultural life of alternative people in Italy. Generally, I have been lucky enough to end up with “friends” and the tasks I have done on the farms have generally brought me further on my path as well as being pleasant to do.

But sometimes I have been at places that I have to question. The social interaction between host and wwoofer, the tasks, the free time, yes even the organic and environmental consciousness did make me wonder what that farm is doing on the list. Or better said: what are they STILL doing on the list?, and I am not the only one. During my travels, I met 10 – 15 WWOOFers and it seems that most of us have had a bad or doubtful WWOOF experience. When we eventually leave that place, we console ourselves with ideas such as “Was I the cause of it?” or “At long last I have left!” and “It’s a pity that I went there at all!”.

After an experience which defied all imagination, I decided to contact the organization. As it turned out this step was very much appreciated by them. There does exist a complaints procedure but there are not a lot of WWOOFers who make the effort to use it, at least not in a constructive way. Sometimes, however, they receive angry, frustrated or disappointed phone calls but they are rarely followed up by a letter of complaint, which is necessary for them to be able to act effectively. Dissatisfaction is the only remaining feeling for these WWOOFers. The most frustrating thing for the coordinators of WWOOF is that they know that there are people not happy with the organization. Through the grape vine, complaints reach them and they can’t do anything about them unless the complaint is written and signed. They remain powerless and always more frustrated and these “bad” farms stay on the list.

With this letter, I want to support both the organization and our WWOOF sisters and brothers. If we would ask ourselves the question “Would I recommend this farm to another WWOOFer?” we could help each other to avoid coming to places with “not WWOOF minded” WWOOF hosts. Or maybe think about this: “For an exchange organization to work it is as much the responsibility of the WWOOFers as it is of the hosts or the organization”.
The organization can do more constructive work with assisting hosts in their commitment with our support. I want to make specially clear that the point of your letter is not just to get rid of them but, perhaps with a little support and advice, unpleasant places can become places where everyone is happy to stay. People who do not understand what it is all about need to be informed and supported and this can start with a letter.
So, don’t accept an unpleasant experience, do something about it. In the first place of course for yourself, but also for your WWOOF sisters, WWOOF brothers and WWOOF hosts.

If you are wondering about my feelings for WWOOF, I can assure you that they are still 99% positive. If you are nervous about ending up on a farm like I did, where it will be not nice to stay, or discouraged to have your first WWOOF experience, then look at my history; In 11 months I have WWOOFer in 3 countries and on 16 farms, I only had 2 farms who gave me the creeps but not in a way that would put me off WWOOFing. I keep on going, and I hope you do the same thing. And if we take up our responsibility, the number of bad places will start to decrease immediately.

One last thing. If you feel a desire to write something about all this, fill out a ticket on

But I want to point out that I don’t want to start an issue on the forum (the organization has to translate all the comments and they don’t really have the time), so don’t just moan and grumble – come up with some constructive ideas. They will love to receive them. 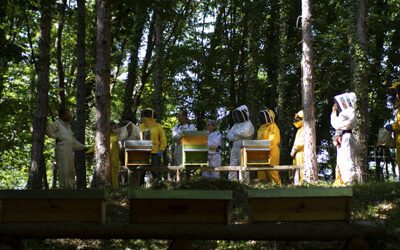